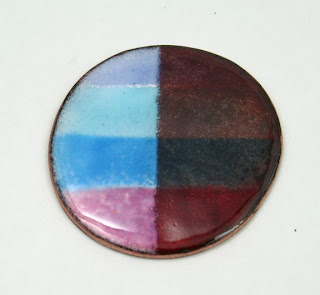 It's been a very busy week. You know the sort, where yesterday was Monday and today is Monday again.... and the rest is a blur. I met many deadlines... stayed up way too late, and didn't get to a few things I'd hoped to do.
On the agenda was more enamel testing on COPPRclay, as was putting together a PDF with some info on the results thus far. The PDF will still happen... but for now, here's an update with a few pictures for those of you patiently waiting...
In the early days of testing the Metal Adventures COPPRclay, a few of us tried using enamel on the fired copper. We encountered problems with pits and bubbles in the enamel. At that time, because we were trying a number of firing schedules and had inconsistent results with the enamel, the consensus was that incomplete sintering was definitely an issue. On pieces that appeared to be fully sintered (but apparently weren't) we might get two or three successful firings before the pitting and bubbles started to occur.

On some thicker pieces, the incomplete sintering allowed copper particles (like that powdery center you see when the copper isn't fully sintered), to migrate into the enamel-enough to make the enamel cloudy and transparent colors look almost opaque. In traditional copper enameling, some of the copper does go into solution which can affect the transparent colors, but higher firing will usually clear that. Not the case with an incompletely sintered COPPRclay piece. The piece above was water etched... fairly thick and not completely sintered. Note how the cloudiness/copper make the green transparent color appear almost black.
At one point, some of us started doing a shelf firing (a suggestion by Darnall Burks), where the COPPRclay is fired on an open shelf before being fired in the (coconut shell) activated carbon filled container. There's been a lot of talk about this more recently and a number of people are trying this now. Shelf firing was a step forward for enameling. At first, I was still having some (but fewer) bubbling issues, though I could get more layers of enamel fired before the bubbles appeared. When I was careful to place the pieces in the hottest part of the kiln, this seemed to help. Pam East, who was also testing COPPRclay with enamel, agrees that shelf firing yields much better results. She too, has been able to consistently achieve numerous enamel firings without bubbles. 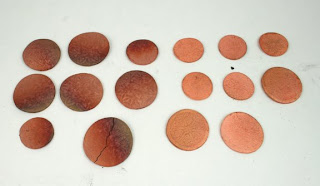 All the pieces above were fired in carbon (full ramp to 1700F). The pieces on the left were only fired in the carbon, while the pieces on the right were shelf fired before carbon firing. You can see the difference in the color and shrinkage of the pieces. The discs were all cut using the same two sizes of cutters. This really illustrates the impact of shelf firing. I actually re-fired the ones that had been fired only in carbon to be certain they were fully sintered.
When I visited Thompson Enamel recently, Woodrow Carpenter suggested that the bubbles may be caused by carbon dioxide which is created and trapped in the carbon environment. He suggested trying to fire the piece with a layer of enamel from a cold kiln like glass, allowing the CO2 plenty of time to escape before the enamel fused. He created a sample that was fired that way and followed that with 4 more traditional hot firings-with no bubbles. From a cold kiln, he heated the first flux layer to 1450F in about 1.5 hours (which I later calculated to be a 1000F ramp for my SC2). 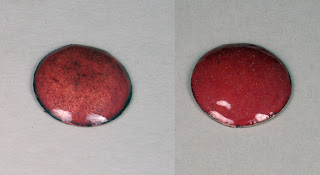 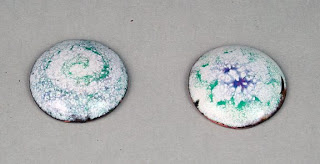 Using Mr. Carpenter's theory of the initial cold kiln firing, I was able to fire pieces that were NOT shelf fired with success. Both of the discs above were fired only in carbon. The one on the left was then fired with the flux layer from a cold kiln, followed by 7 more traditional firings. I'm sure I could have fired it more times, but stopped at 8. On the right side of the image, the piece was fired with the first layer traditionally in a hot kiln (1450F), then 7 more firings. Note the difference in clarity of the first layer. There were problems with several of the subsequent firings with the right one - chipped edges and pits in the back, but still it survived the 8 firings pretty well by using the hard flux layer beneath. I want to try this again and fire the first hot firing to a higher temperature to see if it makes a difference.
One thing was clear - both the shelf fired and carbon fired pieces worked out well with a base layer of hard fusing flux (Thompson 2040) fired from a cold kiln - especially with opaques and transparents layered on top. And shelf fired pieces were fine with traditional firing. Mr. Carpenter also suggested leaving the back open as long as possible, so there was no counter enamel applied until firing #5. I tried some other fluxes as base coats, and some worked better than others. I'll cover this more in the PDF document. 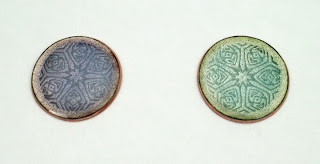 These are tear-away textures which were shelf fired, then carbon fired. They have two layers of transparent enamel fired directly onto the copper (no flux layer). They were NOT fired from a cold kiln... that creates too much fire scale for this technique. But this illustrates that the flux is not necessary for a good transparent look. They were fired at 1550F and the copper cleared nicely giving good crisp colors (a common practice with copper enameling). The tear-away texture creates a beautiful basse taille effect. I'll post some more pictures of this technique soon.
What does all this tell us? Well, more than I want to go into here... but basically, we have the advantage of knowing that the slow firing from a cold kiln will allow us to fire enamel on carbon only fired pieces. This is important, as we may not always be able/want to shelf fire. And we like knowing that the shelf fired pieces can take the transparent colors in a traditional hot firing with such clarity.
We know that COPPRclay firing results can vary from kiln to kiln, as can enamel timing. Using my Paragon SC2 kiln, the shelf firing was a 560F ramp to 560F, hold for 15 minutes. The carbon firing that followed was a full ramp to 1700F, hold for 3.5 hours. Shaped/formed pieces need to be supported during the shelf firing with a fiber blanket to avoid cracking. Shelf firing has its advantages, but not all pieces seem to tolerate the shelf firing equally well. Sometimes you risk more cracking in complicated pieces. Keeping them well supported is critical. The shelf firing appears to improve the sintering process by creating a copper oxide (pieces will be dark or black after shelf firing) which completely reverses in the carbon (pieces are shiny copper).
This is still new territory and as we learn more, opinions may change. Please feel free to ask questions (in the comments section) and I'll do my best to answer them... we all have a lot more testing to do - none of us have all the answers... as you probably know the whole COPPRclay experience is still a learning process.
at 9:40 PM 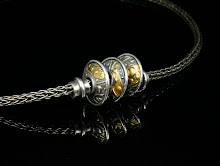 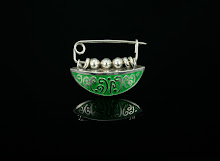 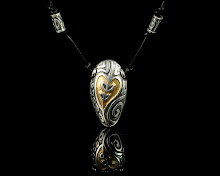